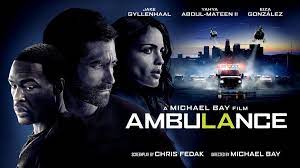 Ambulance is a 2022 released movie and it was centered on a failed bank robbery. William Sharp is an ex-military with a wife and a son. It seems like Williams was adopted by a man whose occupation was robbery. From the storyline, Williams must have been introduced to his adopted father’s robbery business but he left it for the military. Williams has an elder foster brother called Danny who still carried on his father’s robbery business. It happens that Williams must have told his wife about Danny’s kind of business because before Williams left home, she warned him to stay clear of Danny.

It happens that Williams needed money for his wife’s surgery which his health insurance didn’t cover so he sorted for his foster brother’s help. On getting there, Danny had a bank robbery attack already planned out. Danny claimed that he didn’t have money but if William can come with him for the robbery, he would have enough money that will last him a lifetime since he wanted that robbery to be a one-off for William. After much back and forth with so much consideration, William succumbed to Danny’s pressure and they headed to La Federal Bank to rob. Although Danny didn’t want a shootout but things later didn’t go down as planned.

After the robbery gang successfully entered the bank, a cop named Zach who had been crushing on a bank staff named Kim Daniel came to the bank. On getting to the bank and meeting it closed during the banking hour raised dust. He was let in by Danny and was held, hostage. His fellow cop who came with him saw that he was been held hostage, raised an alarm and the shootout started between the robbers and cops.

Unfortunately, all the robbers died in the shootout except Danny and William. The two were able to escape with an ambulance and held a lady who works as a medical personnel hostage. Did you know how it turned out for them and were they able to get away with it? Will Danny betray Williams to save his own life? Please go and watch this movie Ambulance and you will find all the answers to these questions #wink

Movie: The Review of Acrimony

I watched the movie “ACRIMONY ” some days back and I feel like ranting. As …