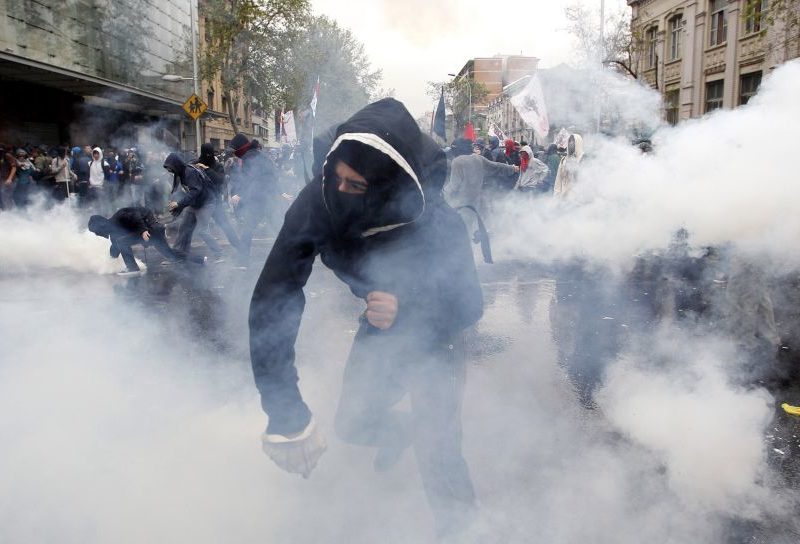 A student protester throws a tear gas canister as they clash with riot policemen during a protest against the government to demand changes in the public state education in Santiago, September 27, 2012. Chilean students have been protesting against what they say is profiteering in the state education system. REUTERS/Ivan Alvarado (CHILE - Tags: POLITICS CIVIL UNREST EDUCATION TPX IMAGES OF THE DAY)

Before People Incite You to Violence, Think About These

I know we all know what violence is but in a layman’s language, it’s when someone or a group of persons causes unrest by using weapons to harm other people. It’s always a terrible and fearful sight. As they say, there is no smoke without fire. Some people are agents of violence and their sole aim is trying to incite people to partake in violence. How do they do that? There are several ways they do it. Most of the time, they play on the intelligence of unsuspecting people. They may present it in a way of protest and sometimes gives you a weapon for self-defense. Since a protest isn’t entirely wrong, whenever a protest turns from being a peaceful one and involves the use of objects of any sort, then it can lead to violence.

As I mentioned, fighting for your right isn’t a bad thing at all but there are procedures for everything (except we choose to ignore the procedure) and when followed properly, we can achieve the same result that we seek. When someone or people want to incite you to fight against your brother/kinsmen/country person/another human, ask yourself these questions:

If most of your answers are negative, then it’s time for you to rethink and reconsider your decisions. See, this is a simple truth that either you do not want to believe or they are not telling you. These people love themselves behind the scene. They are in the same social clubs and they settle their differences over dinner or while hanging out. If you kill yourselves because they asked you to or incited you into violence, you are not a martyr anything. Nobody will even know that you died except for your family and close friends. If worse comes to worst, they will fly out with their families and leave you to your fate. You better give yourself a brain now and do normal especially if you are broke. It’s the gospel truth and nothing but the truth.

You see as I dey so, before someone can incite me to fight another human all in the name of fighting for my right, that person coupled with his/her family must be on the battlefield with me or else count me out. You cannot be in diaspora, carry a placard, and be telling me to carry weapons to fight. If you so believe in whatever you are telling me, why didn’t you come and join in the physical fight? Or do you want to tell me your family does not believe in the struggle too? At least the first people that should be at the forefront should be the person and his/her family, if they are not there, am not going. Case closed!

Accountant | Social worker | Educationist | Blogger | Foodist | Web Developer | Entrepreneur. Founder of @chowmart and @dommyfoodie
Previous How to Stay Safe This Election Period
Next NNU Income is a Fraud like MMM