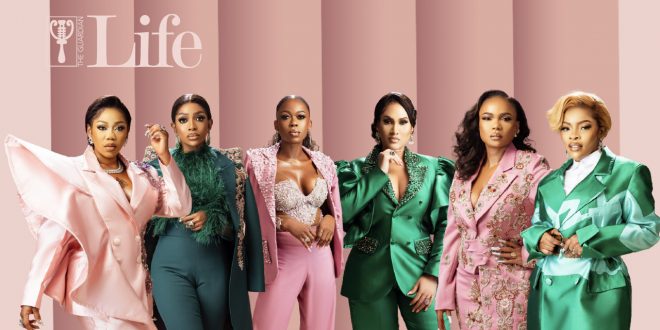 The real housewives of Lagos episode 2 is centered on the girls’ beach hangout. So Laura visited Tiannah’s place to pick some clothes for her photoshoot and Tiannah used that opportunity to discuss with Laura her attitude at her baby’s clothing line launching. Laura claimed that she had anticipated that Tiannah was going to talk about her attitude at the event hence she came to her shop. Tiannah was quite vocal and spoke her mind to Laura and also urged her to speak her mind which she refused. Although she spoke about, not liking the clique and not being adequately informed about those who would be gracing her occasion.

Tiannah told her she had no obligation to tell her who and who would be coming to her party. She also used that opportunity to appeal to Laura to make it to the beach hangout with the girls but she declined. The day came for the hangout and Iyabo was ready. She had hired a beach bus to convene them to the beach. Her first stop was at Tiannah’s. She picked her up and headed to pick up Laura. Tiannah called Laura if she was ready but Laura gave her another attitude. She was asking Tiannah, “is it today”? Understandably, Tiannah was pissed but laughed over it but Iyabo didn’t care. I guess Iyabo originally do not like Laura especially not with the first impression she put up at the clothing line launching. The bus picked up the other girls and they headed to the beach and had mad fun.

To be honest, Iyabo is the queen of hosting. She is the proper definition of a Yoruba girl cos she hosted them paa. Even the girls were surprised cos they never expected Iyabo was going to pull that stunt she did hosting them at the beach. From the exotic trip to the nice private rooms to the food, music, dance, and games. The girls had fun and there was no pretense to that. I am really glad that Laura didn’t come for the beach hangout, to be honest cos it would have made everywhere dull and the girls (especially Laura and Chioma) not to be free that much and tension would have been high. Also, I think Iyabo is trying so hard to impress the girls, especially Chioma and Carolyn.

Granted, Iyabo is beautiful, hot, and rich too but I sort of feel she wants to be like Chioma and Carolyn or maybe she is subtly intimidated by them (I am thinking maybe because Chioma and Carolyn speak UK English with accents and that’s understandable because Chioma lived almost all her life in the UK and Carolyn is half British). Either way, I feel Iyabo was doing too much but again, it is a good thing. So far, I like the combination of the girls (Iyabo, Tiannah, Carolyn, and Chioma). I do not know if Laura will improve but if it was what I watched in episode 1 is what she would be bringing all through, then I’d be glad to miss her parts.