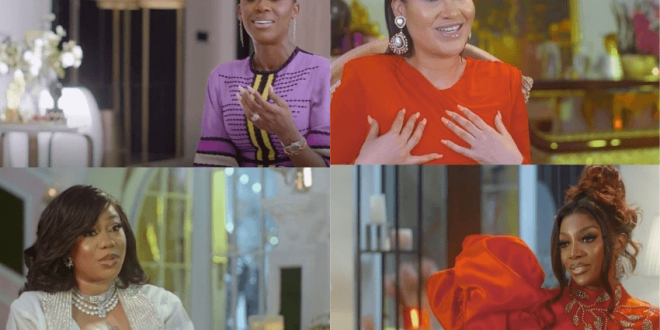 This episode does not have much drama but definitely, there were subtle ones. So Laura is hosting her first fashion show and has asked Iyabo and Mariam to run the way. She had equally extended her invitation to the girls but she doubted if Chioma and Carolyn were going to come and didn’t care if they didn’t. Fortunately, everyone came. The fashion show was a success and Laura was very happy it was held and the girls came. Carolyn and Tiannah are not talking and no one knows why but I am probably thinking it was because of what happened at the Airport lounge when Chioma was taking them to Abuja for a 3-day vacation. Tiannah feels Carolyn is a chronic latecomer and so the two girls (Carolyn and Tiannah) didn’t speak to themselves and it was obvious. Chioma thinks Laura’s fashion pieces were trash and she can’t wear them to a function rather she could manage to wear one that caught her fancy to bed. Carolyn had similar feelings and so do Tiannah. Tiannah tried to “market” her collection to Chioma who was sitting beside her and Chioma felt it was inappropriate for her to market her designs to her at their friend’s event.

After the event at the lounge, there were so many pretenses by Carolyn and Chioma of how they loved Laura’s collections and want to buy as many as they want. This was seriously pissing Tiannah off as she knows that they do not like Laura nor her collections but were faking. The whole event ended without a physical drama display but of course, there were subtle drama and shades here and there. Iyabo brought her daughter Priscilla along and they both ran the way. They stole the event and these were the aspects the girls loved cos they enjoyed the fact that Iyabo used that moment to bond with her daughter. Chioma, Mariam, and Carolyn wished for the same too. The event ended and Mariam was to host them the next Thursday at her home. She said all girls should keep their dramas at home or else she would not hesitate to throw any of them out. Although Mariam might be joking about saying that but they feel it was rude of her.

All the girls have agreed to come to Mariam’s house but what will happen next?

Remember, Mariam feels Carolyn is proud probably because she was an ex-billionaire’s wife but Mariam too is equally married to a super-rich white man and feels that Carolyn isn’t indispensable. Will Mariam and Carolyn clash at the event? Whom do you think will bring drama at the Thursday hangout?

Watch this space and do not forget to subscribe. 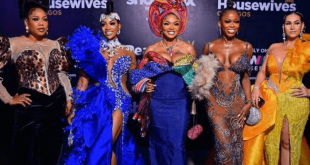 The Real Housewives of Lagos Episode 4 & 5 (The Abuja Trip)