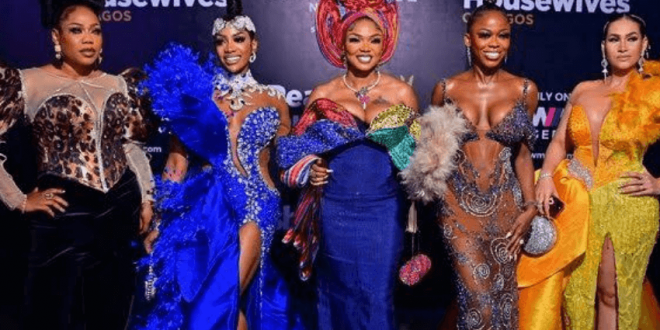 The Real Housewives of Lagos Episode 4 & 5 (The Abuja Trip)

Previously on the real housewives of Lagos

I will be combining episodes 4 and 5 because the Abuja trip started in episode 4 and ended in episode 5. The trip was the main highlight of both episodes.

It was Chioma’s turn to host the girls and she wanted something different and unique. She sent them an invitation box which contains a bottle of champagne and other items as well as a card that included the names of the girls asking them to journey with her to the land of “power and wealth”. It was supposed to be a mystery and she wanted the girls to keep guessing until it was the expected day of the trip. Before the mystery trip, Chioma invited the girls to a Japanese restaurant to officially invite them. This time around, all the girls were around for the dinner. Chioma revealed that the girls can bring one extra person. Iyabo disclosed that she wouldn’t be around for the trip because she had already scheduled to travel to London, Dubai, and Turkey. Chioma was disappointed but the trip must go on.

The D-day came and the 4 girls (Laura, Tiannah, Carolyn, and Chioma) were to travel by private jet while the other girls were to come on their own. Chioma lodged the girls at the prestigious Transcrop Hilton Hotel in Abuja. The other girls came and were paired with their inviters. The hangout fun started probably in the evening when the girls kinda had a shower theme evening, each girl wearing a costume on their head. At first, the place was lonely and all the girls were forming but as soon as Mariam walked in, she was all over the place. Laura, she didn’t really like Mariam cos she feels she was all over the place and was doing too much. On the other hand, Mariam who was invited by Tiannah and also a best friend of hers, says this is who she is and she is not faking it. Carolyn on the other hand wasn’t comfortable because she claims that she doesn’t know the girls as they were total strangers to her. Chioma suggested they dance around chairs and sit whenever the music stops. Mariam won the game and they moved to another game.

The next game brought in some mild drama. Chioma suggested the “Truth or Dare” game. Some girls were asked some questions and they were answered even though some of them were lying. Tiannah asked Carolyn about her failed marriage and this pissed Carolyn off but she kept her cool. She felt her family was a private issue and felt it was an overstepping boundary by Tiannah. Carolyn said that if Tiannah wants to talk about her ex-husband then she should start by talking about her baby daddies. The event climaxed with a dinner where all the girls came. Tiannah has been having issues with Carolyn and her late-coming attitude to events and Carolyn isn’t going to have that as she said Tiannah isn’t her mother to tell her what and what not to do.

Carolyn is still maintaining beauty and poise and the only person I think she likes is Chioma cos they sort of have the same aura and charm coupled with the fact that they both like luxury and wealth. Chioma likes the girls’ clique but she doesn’t like Laura in the group and if there is anything she could do about it, trust me she would. She is bitchy no doubt but she is trying as much as she can not have any face-off with Laura again. I do not think she likes Laura at all. Iyabo is a mixed breed. I think her personality depends on what you’re bringing. She is cool with the other girls but Laura. I think the impression Laura created the first time is still in her head and you can read it all whenever she is talking to Laura with so much disdain. Iyabo is doing all she can to be in the good books of Carolyn and Chioma. Iyabo doesn’t see the need to impress Tiannah because first Tiannah doesn’t appear like someone that cares and secondly she and Iyabo are already vibing and have these ghetto kinda things in common. I like Iyabo for her versatility though. For Laura, I have lots of things to talk about her.

First and foremost, I love the fact that Laura is family-oriented and looks out for her loved ones. Just like Tiannah said, she might have lost lots of friends and relationships due to her obsession with family and loved ones. According to Tiannah, she said it’s a good thing and she should keep it up. But is that? Well, I do not agree with Tiannah  I think in life there should be boundaries to everything. Laura said that whenever anyone talks or has issues with any family member of hers and she gets to meet with such person, she will give them attitude the first day she meets them and the last they would ever meet. If you ask me, that’s toxic! Your family members can be wrong too as they are not fallen, angels. This does not mean that you can’t have your family’s back. I think it is ideal when you meet someone who has said something bad about your family, just be neutral and observe them. There isn’t any need for you to be bitchy to them or give them an attitude. If you want to go by that, you wouldn’t sit with anyone cos Linda has hurt lots of people with her blog. What if everyone she has hurt treats you like you want to be treating them? Fair?

Again I think Laura isn’t who she presents herself to be on Instagram. Even though she admitted that she’s a shy person in real life but on social media, she gives us this vibe of a lioness, an extrovert, a party butterfly, and Ikeji’s “Hank Horgan” whereas she presents the opposite. Mariam is even presenting the energy I was expecting from Laura. An extrovert never gets shy in the public at all. They make everywhere lively as soon as they stepped in and that’s what Mariam did. I could only imagine how that Abuja trip would have been assuming Iyabo too was around. It would have been more fun.

Also, I think Laura feels intimidated by the girls. It’s not all about saying “I am not afraid of anyone”, “fvck you” blah blah blah. Deep down I think Laura feels like people do not see her wealth and maybe relegates her. Or maybe people are recognising her because of her sister Linda. Laura at a point said she isn’t ghetto and I’m like. You’re not what? Like c’mon, fortune smiled on you guys courtesy of Linda like recently! Like in your adulthood and it’s not like you’ve lived in affluence since you’re a kid.

Money is money and I recognize that but stop feeling like you’re at par or better than Chioma who was raised in wealth. The same applies to Carolyn too. It’s just that at some point in Carolyn’s life, she had to struggle a bit. Also, Laura needs to have a frank talk with herself. She needs a proper personality. It’s either you’re an indoor, introvert family-oriented kinda woman or a lousy, controversial, extrovert woman. You need to pick a side just like Tiannah had done. Saying Chioma claims to have what she doesn’t have is laughable. Like this girl hired a private jet to take you guys to Abuja, paid for 3 nights at Transcrop Hilton Hotel at Abuja, and the rest. C’mon Laura this girl isn’t your mate in the affluence world and your need to just respect that. That does not in anyways reduce your wealth! 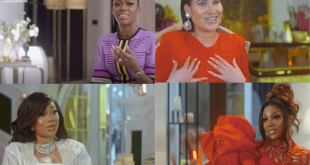